Alejandro Moreno`s lectures at the Faculty of Social Sciences

From 19 to 26 of November Alejandro Moreno gave a series of lectures on the election polling, voting behavior, campaign effects and political attitudes in Latin American countries. The presentation and video are available online! 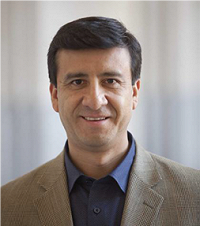 Alejandro Moreno is a Professor of Political Science at ITAM (since 1996), and Head of the Department of Public Opinion Research at Reforma newspaper (since 1999). He is a member of Mexico’s National System of Researchers (SNI), and Mexico`s  Principal Investigator for the World Values Survey and the Comparative National Elections Project (CNEP). He is also a Managing Director of the Latinobarómetro (since 2010), and eх-President of the World Association for Public Opinion Research (WAPOR).

From 19th of November to 3rd of December Alejandro Moreno gave a series of lectures on the election polling, voting behavior, campaign effects and political attitudes in Latin American countries. Besides public lectures and workshops the professor also consulted researchers from the LCSR. He provided a valuable feedback on the individual research projects of the LSCR staff.

The first presentation titled "Understanding Citizen Satisfaction with Democracy: Empirical Evidence from 18 Latin American Countries" was introduced on the Plenary Session at the 5th LCSR conference on November 19 (the abstract, presentation are available online, you can watch the video record on LCSR YouTube channel).

During the next week after the conference Alejandro gave a series of lectures: "Value Change and Institutional Adaptation in Latin America" and "Two Decades of Scholarly Work on the Mexican Voter" on November 23; "Measuring Campaign Effects with Panel Data" and "The Origins of Survey Research and their Lessons for Today’s Comparative Surveys" on November 24; "The Accuracy of Election Polls in New Democracies" on November 26. The abstracts are available online and we are glad to share the presentations with you:

The concluding lecture on "Social and Political Trust in Latin America and Sub Saharan Africa" took place at the LCSR weekly seminar, which is held every Thursday.  Alejandro gave a talk about the patterns of social and political trust in developing countries from Latin America and Sub Saharan Africa. In the analyses he used data from the regional barometers (Latinobarómetro and Afrobarometer) (the presentation is available online on our web-site).