Sociologists in the Land of the Rising Sun 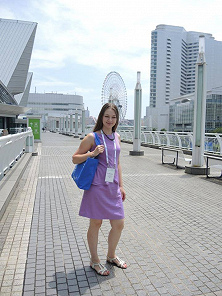 XVIII World Congress of the International Sociological Association was held in Yokohama, the second largest city in Japan, from 13 July to 19 July, 2014.Several LCSR researchers and members of the Lab’s scientific network participated in the event. Anna Marchenko, Ekaterina Lytkina and Dmytro Khutkyy  share their impressions of the Congress.

Anna Marchenko: Due to the support of the Laboratory for Comparative Social Research I was lucky to be in the thick of the core events in the sociological world. The scope was really impressive: more than six thousand participants from more than a hundred countries; fifty five research committees, four thematic groups and four working groups running simultaneously, not to mention the plenary sessions with leading sociologists.

Title of the Congress, "Facing an Unequal World: Challenges for Global Sociology" adjusted to a certain mode, which was supported by the presence of geographically-defined thematic sessions (for example, Japanese, Asian. African). Opening address of the President of the International Sociological Association, Michael Burawoy placed additional emphasis, to some extent grounding on a book by Thomas Piketty "Capital in the twenty-first century" (one of the most cited authors throughout the Congress). By the way, I encountered unexpected intersections in the diversity of sociological genres (for example, a section on understanding scientific heritage Jeffrey Alexander in Asia, which was attended by Professor Alexander himself). Among numerous interesting reports I would particularly admit a presentation by Goran Therborn on key errors in the perception of inequality and a presentation by Saskia Sassen on social expulsion in contemporary world; as well as an unusual session "Looking backwards and forwards" held by the ex-presidents of the International Sociological Association.

I have presented two projects during the Congress: "Is there a unified recipe to predict civic engagement? Comparison of European countries" (a project which I have been realizing as Associate Researcher of the Laboratory for Comparative Social Research) at the Research Committee "Comparative Sociology" and "Hasidic pilgrimage as a cultural performance: Challenges and Opportunities" at the Research Committee"Sociology of Religion". It was efficient to get questions and comments during the committees work, as well as to learn about colleagues’ projects and interests. In particular, I would remark the reports by Jean-Pascal Deloz about conspicuous modesty among immigrants from the Nordic countries in Strasbourg, and Gwendolyn Gillieron’s presentation about the potential of multi-level qualitative analysis in sociological research. Besides, I managed to visit a number of other sessions which were close to my interests, and get valuable feedback in the thematic field of citizenship and civic participation (e.g., the sessions of research committees "Political Sociology" and "Social Movements, Collective Actions and Social Change").

All in all, the event was extremely informative not only because of intensive intellectual program, but as well due to unusual (of course, for the Western or pro-Western sociologist) social and cultural context. It was interesting to learn about the development of Environmental Sociology, Sociology of Disaster, and many other subfields and projects in the Asian region. Japanese music concert, as well as tea ceremony, organized for the Congress members, became a kind of invitation to the other culture.

Japan seemed to be very original country in which the population has strong spirit; the Japanese themselves - responsive and friendly, despite the fact that most of the residents whom I met on my way had a very slight command of English. After returning to my homeland I am once again convinced that a better understanding of social environment comes from the encounter with “another” - methodological approach, geographical area, cultural code...

Ekaterina Lytkina: At the Eighteenth World Congress of Sociology of the International Sociological Association (ISA)  I was selected to a board member of the Research Committee 36 "Alienation Theory". My main duties at the committee will be involvement of junior researchers in the work of the committee. The research committee was founded in 1972 and includes such leading specialists in alienation as authors of various books and articles including encyclopaedia texts as professor of Loyola University Chicago Lauren Langman and professor of the University of Haifa Devorah Kalekin-Fishman. The head of the committee is the leading specialist of Symbolic Interactionism in Sweden, professor of the Uppsala University Vessela Misheva. I have been participating in the research committee since 2010. I aimat organizing a session on anomie and alienation at the forthcoming Third ISA Forum of Sociology in Vienna in 2016. The next conference of the research committee on Alienation Theory will be in then summer 2015 in Chicago, preliminary, within the ASA annual meeting. LSCR researchers and visitors of the LCSR webpage are invited to participate in the activities of the committee and the forthcoming conferences!

Dmytro Khutkyy: This XVIII ISA World Congress of Sociology in Yokohama has been a definite success! The record number of participants – over 6,000 is indeed impressive. The very first speech of the past-president Michael Burawoy was passionate and inspiring. The following week was full of sessions, professional development events, informal meetings, cultural performances and country trips. The presentations were very diverse: from pure theorizing tocomplex quantitative empirical research, from case studies to global trends.Sometimes they were one-way addresses and sometimes – meaningful discussions with the audience. It was extremely motivating to receive an apt feedback and engage in intense arguments with outstanding scholars. The conference center, itself a futuristic site, might have looked as a huge anthill, occupied by thousands of sociologists of all fields one can imagine, hurrying for sessions, suddenly meeting with each other, and exchanging millions of ideas on the way. Drums, tea ceremonies, excursions to historical sites and gardens added their own charm. Research committees’ parties created a distinct atmosphere of an unusual mix of academic discussions, jokes, and cordial talks. I am confident that the event has brought to life numerous interpersonal contacts, bright insights, new research designs, and undoubtedly made a memorable impression. The farewell party with dragon dances, jazz music and merry chatting has been a nice final, after which one could sit on a pier, have arelaxed talk with a friend, look into the ocean and say goodbye to the people and the Congress in his or her own way.

Roberto Foa: From July 15th-21st, 2014, participants of the Laboratory for Comparative Social Research joined the ISA World Congress of Sociology in Yokohama, Japan, and presented results from joint projects. On the Wednesday session I presented my findings from our work on frontier societies - a comparative study of social and political institutions in the frontier areas of Russia, Brazil, the United States and Canada. The panel was extremely well attended, and led to useful feedback from colleagues from universities in Europe, Asia and the United States, as well as offers of research collaboration which we will be pursuing in future iterations.  After the Yokohama meetings, with the support of the LCSR I also attended the International Political Science Association meetings in Montreal, where on the 21st of July the World Values Surveys officially launched its new wave of data to the global political science community, and I presented results from ongoing work on state capacity and institutional trust. Through workshops and receptions we were able to introduce the World Values Survey research of the LCSR to a wide range of scholars of Russia and Central Asia, from across the world community of political science scholars.