Capitalism and Nationalism in Post-Communism and West European Countries

A report by Julia Zelikova at the LCSR regular seminar 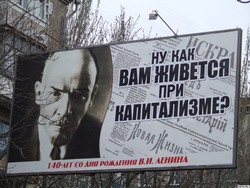 On April, 18, Julia Zelikova, research fellow at the Laboratory for Comparative Social Research, delivered a report on «Capitalism and Nationalism in Post-Communism and West European Countries» at the regular LSCR Seminar.

After the collapse of communist systems in East-Central Europe, ethnic tensions have appeared in almost all countries within the region and became to play a substantial role in politics and social life. Rise of nationalism even provoked ethnic violence in some states. Despite it, population of these countries still demonstrates a strong demand for democracy,

In her study, Julia raises several questions concerning relations between nationalism, capitalism and democracy. Are nationalist sentiments and intolerance accompanied by negative attitudes towards democracy? If so, do they emerge on account of strong anti-capitalistic feelings? Do those strata of the population that were particularly affected by the negative outcomes of post-socialist reforms (i.e. individuals with low-level qualifications and income) plead for traditional socialist economic and authoritarian rule? Could intolerance and latent nationalism be explained as reactions to the new socio-economic conditions?

Julia based her account of nationalism upon several well-known theories such as authoritarian personality theory developed by Adorno, modernization theory, and various Marxist theories. She created set of hypotheses linking social status, nationalist orientations, ethnic intolerance, anti-capitalist beliefs and attitudes towards democracy. Such attitudes are considered as a defensive reaction to rapid economic change of those who couldn't adapt for new economic conditions.

To sum up, empirical analysis partially confirmed Julia’s hypotheses. The results support the claim that in post-communist countries nationalism occurs from resentment against the economic rationalization of society, which is mainly held by people with lower social status. Support of democratic values is nonetheless independent of social status, and there is no impact of democratic orientation on ethnic tolerance. In Western Europe context the supposed effect of individual social status on the dependent variables was demonstrated. However, positive attitudes towards market capitalism have no negative effect on nationalism. (Nor alternative theory – that procapitalist attitudes would give rise to feelings of national superiority – was verified)