Happier than you! Reassessment of Progress 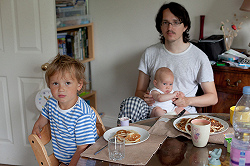 Serban Tanasa, an LCSR associate researcher and associate professor at Higher School of Economics at Saint-Petersburg, delivered a report on "Happier than you! Reassessment of Progress" at the regular seminar of the Laboratory on January, 24.
He aimed to answer 3 questions: is economic growth sufficient to raise people`s happiness? Are there countries or regions where subjective well-being (SWB) is stable and constant, or it is inherently elastic? Is there a non-fiscal policy that might influence SWB?
Some influential research was conducted in this field last year. It is shown that “countries with faster growth rates report lower happiness levels” (Graham, Chattopadhyay, 2012).
Sacks, Stevenson and Wolfers (2012) found that richer countries on average have higher levels of life satisfaction, similarly to richer individuals; they report higher levels of SWB than poorer ones, but non-financial factors such as health, age and weather also matter.
Deaton (2010) found that satisfaction with health declines with age, and is the lowest among the elderly. But there is a difference between rich and poor countries: the rate of deterioration is much bigger in poor countries. But in some of the richest countries satisfaction with health rises towards the end of life.
Easterlin (2012) considers that not economic growth, but full employment and comprehensive social safety net increase happiness.
Serban pointed out several measurement problems. First of all, the World Values Survey data does not allow indicating changes in levels of SWB during and after short-term economic recession which is not reflected in GDP rates.
Serban suggests adjusting the WVS data. It is necessary to take into account recession in the recent years and to take the depth of recession into consideration. Then, a 1% dip sustained for 3 months should probably have smaller effect than a 36 month drop in GDP leaving the country 25% poorer.
He considers that multilevel model is needed. It should include both individual level data and country-year macro-level measurements.
At the end, Serban suggested changing some indicators, for instance, it would be better to use median income instead of GINI index of inequality. Then, rates of mean household income do not account for the value of direct and indirect government transfers and many other details.