Value Changes and Voting for Radical Right-Wing Parties in Europe: 1990-2010 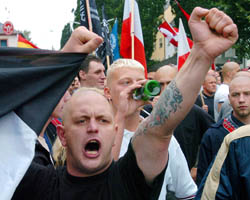 Boris Sokolov delivered a report on his research “Value Changes and Voting for Radical Right-Wing Parties in Europe in 1990-2010” at the regular seminar of the Laboratory of Social Comparative Research on November 29, 2012.

Various theories of modernization predict that economic growth as well as cultural and technological development decrease level of nationalism, xenophobia, and intolerance. However, nowadays we observe certain opposite trends. There are some rise in xenophobia and nationalism among citizens of developed countries. This trend is proved by growing voting for extreme right-wing parties.

The main question of Boris’s research is whether economic conditions are the main determinants of negative out-group attitudes, such as xenophobia, nationalism and support for radical right parties, or cultural specificity also does matter.

Previous works on extreme right-wing parties (ERP) support were predominantly focused on social and economic determinants such as unemployment rate, level of immigration or GDP per capita. This research adds value component of ERP voting into account.

Boris used data on 29 European countries collected during 6th wave of World Values Survey. Data on European elections from 1990 to 2010 were also included into analysis.

Then he constructed two indices: index of postmaterialism which reflects the main trend of value change in Europe; and index of xenophobia which shows citizens`attitudes towards out-groups such as migrants.

Regression modelling showed that on the individual level postmaterialism and xenophobia affect ideological position in opposite ways; on the aggregated level polarization of postmaterialism is insignificant while xenophobia polarization is a robust predictor of voting for radical right-wing parties. Country mean of postmaterialism index is still significant but its effect disappears when controlling for GDP or unemployment level. It was also revealed that majoritarian electoral design significantly decreases a share of votes for extreme right parties.