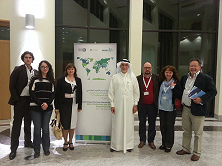 At the end of April Eduard Ponarin, Tatiana Karabchuk and Anna Almakaeva participated in the General  Assembly of the World Values Survey Association that took place at Doha (Qatar). Tatiana Karabchuk shares her impressions.

How would you describe your general impression of participation in such a grand-scale and prestigious event?

T.K. : The trip left the most pleasant impression. That was very exciting. People from all over the world with their national flavor, not just united by common goal but living it – this is unforgettable! It really motivates you to work harder and raises huge desire to contribute to the progress of this shared project.

What was the format of the Assembly? Could you please talk more about the goals of the event?

T.K. : The main goal was to accept the new constitution of the World Values Survey. Besides, on the first day there was an interesting seminar devoted to different aspects of regional studies of North Africa and the Middle East. On the second day we had a discussion of organizational and methodological issues linked to the geographical expansion and increasing quality of the WVS surveys. On the third day there was a conference where the current studies of the participants were presented.

Which events – lections, reports, seminars, round-table conferences – you remember the most?

T.K.:  Personally, I found research reports and lectures dealing with value change and social processes in different regions of the world (especially Arab countries, Central Asia and Latin America) the most stimulating.

And what was you report about? Was it welcomed by the listeners?

T.K.: I delivered a report on the factors influencing female happinesswhich is my current project at the lab. I would say that the audience was rather excited; during the discussion I got quite a number of very useful comments and advice.

Were there any other Russian universities and research centers presented at the event?

This year they chose Qatar as a location for the Assembly. What is your impression of this country? Did you have a possibility to take a break and see the city of Doha?

T.K.: Unfortunately, our schedule was really tight and left us little time for sightseeing. Though the things that we managed to see were amazing! Qatar is a wonderful country!

Thank you for the interview!