Why People Trust the Police? Evidence from European Social Survey

A report by Anna Almakaeva at the LCSR regular seminar 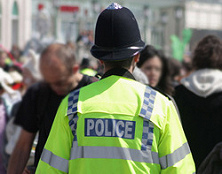 On December 12 Anna Almakaeva (senior research fellow at LCSR) presented a report on «Why People Trust the Police? Evidence from European Social Survey» at the LCSR regular seminar.

Anna used the fifth wave of European Social Survey for 27 countries as well as good governance indicators in her research. The main dependent variable was general trust to the police. It was measured by the answer to the question «How much you personally trust the police?» using 11 point scale. On individual level independent variables were the following: legitimacy, trust in procedural fairness, feeling of safety, crime experience, discrimination, age, gender, education and subjective income. On country level independent variable was the quality of institutions.

Anna’s report was well-received by seminar attendees and invoked several questions and suggestions. There was a question regarding the use of corruption perception index, which is often being criticized for the closed nature of some of its components. There was a suggestion to use another measurement of corruption. Anna in her turn explained that while CPI is being criticized it clearly correlates with Good Governance indicators, which justifies its use in this study.