An article by Malgorzata Mikucka in Survey Research Methods 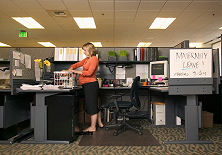 In survey research the parental leave beneficiaries are usually coded as either employed or inactive. An exception is the European Labor Force Survey (EU-LFS), which includes parental leave among other forms of being employed but temporarily not working. This paper explores classification of parental leave takers in EU-LFS. We show that classification rules differ crossnationally: in some countries parental leave takers are considered inactive, in others – employed but temporarily not working. In particular in the Czech Republic, Estonia, Hungary and Slovakia the EU-LFS data classify the beneficiaries as inactive. We estimate the number of mothers on parental leave in these countries and show that EU-LFS employment rates of women aged 18-40 are biased downwards 2-7 percentage points; for mothers of children aged 0-2 the bias reaches 12-45 percentage points. Our study shows the limited comparability of EU-LFS employment rates and warns about possible bias in cross-national studies.