Read a report by Irina Vartanova 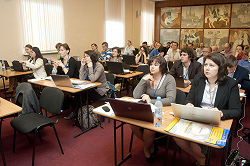 Today was the first day of the Third LCSR International Workshop. The workshop was inaugurated by Eduard Ponarin, LCSR Director, and Christian Welzel, President of the  World Values Survey Association.

Eduard Ponarin congratulated LCSR researchers for their work, which has been highly commended by the Russian Government, and which has agreed to extend the institute’s governmental grant. He thanked Ronald Inglehart and Christian Welzel for their effective management, the experienced specialists they have brought to the center, and their contribution to the development of a collaborative spirit in the Laboratory. Professor Welzel emphasized that hosting international workshops has already become a solid tradition. The events have tended to be rather intensive, but he reflected that scholars with a will to learn can cope with pressure easily. Prof. Welzel hoped that this year’s workshop would be yet another inspiring academic event.

The first session of the first day was dedicated to studies in social transformations. Francesco Sarracino (University of Florence) delivered the opening presentation, which was on the contradiction in trends of GDP per capita and subjective well-being in China from 1990 to 2007. The next speaker, Ekaterina Lytkina, who is a research assistant at the LSCR, presented on innovative measurement model of anomie and anomia using indicators of meaninglessness and normlessness. Evgenia Bystrov (Jacobs University Bremen) presented a theoretical paper on the influence of socio-economic factors and value orientations on family behavior in Eastern and Central Europe.

In the second session, a guest lecture was delivered by Marcel Das, professor at Tilburg University and director of CentERdata. He spoke on the topic of ‘MESS’ - a unique project which is aimed at developing innovative methods of data collection in the social sciences. The main component of the project is longitudinal online survey including 7,000 respondents. The collected dataset includes a core panel study, plus additional modules which can be ordered by any researcher across the world, plus diary notes, accelerometer data, and even the respondent's weight. The entire data was collected using innovative methods. Christian Welzel voiced the sentiments of the audience by commending the project.

Kirill Zhirkov (LCSR HSE, St. Petersburg) opened the second session with a presentation entitled “Between Culture and Politics: Testing Alternative Explanations of Anti-Americanism.” Utilizing multilevel modeling, Kirill confirmed the results of his previous work and demonstrated that self-identification as “Muslim” remains an important predictor of anti-American orientation.  Maxim Rudnev (ISRAS; HSE, Moscow) next demonstrated the initial results of his project. According to him the main sources of value consensus among individuals are age and social class. Finally, Serban Tanasa (HSE, St. Petersburg) discussed several strategies of operationalization of the income component adopted in subjective well-being research.This interesting and exciting first day was celebrated with cocktails in the evening.