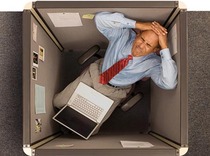 Marina Nikitina, Natalia Soboleva and Tatiana Karabchuk (LCSR) delivered a report on "Subjective Well-being of Untypically Employed" at the regular seminar of the Laboratory on December, 6, 2012.

Marina, Natalia and Tatiana presented a progress report on their project that is aimed to study how the type of employment affects subjective well-being.

While 30 year ago the predominant type of employment was full-time permanent contract, now non-standard contracts including part-time, informal, temporary job and self-employment are widespread. Traditionally they are associated with lower wages, lack of social benefits and guarantees as well as with the feeling of inferiority and uncertainty in the future. So it is reasonable to assume that people’s well-being (happiness, life satisfaction) depends to a large extent on employment status.

Literature review shows that part-time job negatively affects both job- and life-satisfaction while self-employment, on the contrary, has a positive effect on both these parameters.

The preliminary findings reveal that the type of employment does affect job satisfaction. In the majority of European countries self-employed are more satisfied with their jobs than full-time and part-time employed. Moreover, satisfaction with work-life balance is lower than job satisfaction and subjective well-being. In addition, job is less important in the countries where self-expression values are more prevalent.