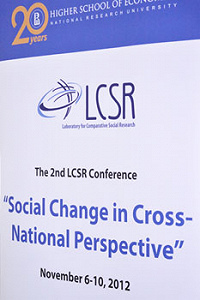 The last day of the Conference started with a presentation of a new project “Urban Loneliness? Investigating its Roots and Consequences through European Social Survey Data” conducted by Christopher Swader (HSE, Moscow). He explained a difference between concepts of alienation and loneliness and highlighted some factors leading to upraise of those phenomena in big cities. The next speaker, Serban Tanasa (HSE, St. Petersburg), gave an inspiring talk on relation between happiness in the society and economic processes. He refuted both assumption about level of happiness being a fixed indicator and hypothesis about economic development being an a key determinant of happiness. A report of Zsófia Ignácz(Jacobs University Bremen) was devoted to the investigation of relation between socialist legacy and perceiving of justice in post-socialists countries. According to the results of her research current state of the economy has large impact on population’s attitude to wage distribution while socialist past is almost insignificant.

The next working session dedicated to innovative consumption, bribery and corruption provoked quite lively discussion. Natalia Firsova (HSE, Moscow) presented a new project concerning with study of social determinants of innovative consumption practices and Internet utilization in Russian households. Then Alexey Bessudnov (HSE, Moscow) showed results of his ongoing project “Region Variation in Everyday Bribery in Russia: A Multilevel Study”. He revealed both individual and regional predictors of bribery: gender, education, household income and occupational status – on individual level, and crime rate – the only significant factor on regional level. Nicolas Griesshaber (Humboldt University Berlin) delivered a report on the impact of association membership on individual acceptance of corrupt activities. It turned out that in highly corrupt societies associations could be really strong opponents to corruption.

After lunch the last working session of the Conference was launched by Roberto Foa (Harvard University, USA and LCSR HSE St. Peterburg) who presented his new research on the linkage between history of a state and performance of its current government using cases of former soviet countries and India. Cross-national analyses showed a compelling correlation between state history and measures of public order, such as crime rate, homicide, and surveyed tolerance of bribery and tax evasion. Then Marina Goroshit (Tel Hai College, Israel) showed results of her study of protest behavior in different European countries and stated individual and environmental factors which influence it. Evgeniya Polyakova (Johannes Gutenberg University Mainz, Germany) talked about a project entitled“The economic and cultural components of integration of labor immigrants: economic approach”. She suggested a formal model of immigrants’ choice of an integration strategy. She also supposed that economic development of a country have an impact on the integration strategy of migrants and in developed countries economic factors are even more influential than cultural component. The last speaker, Alexander Sherstobitov (Saint Petersburg State University), presented a report on possible effects of football wins and losses on popularity of governments in Latin America and Eastern Europe.

Christian Welzel and Eduard Ponarin who presided over the closing session of the Conference thanked all the participants for such fruitful work and expressed strong confidence that LCSR team would present even more exciting projects and reports during the next Conference.