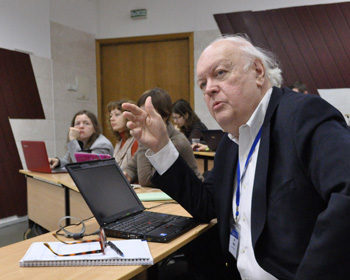 Program of the fourth day of the 2nd Annual International Research Conference of the LCSR included the following sections: “Social Change and Genetic Diversity”, “Gender, Work and Life Satisfaction”, “Ageing and Social Well-Being” and “Migration, Value Change and Nationalism”.

Andrey Shcherbak (HSE, Saint-Petersburg) presented a collaborative research with Svetlana Borinskaya. Their project is devoted to study of links between the genes ADH1B and ALDH2-2 which affect alcohol digestion, and colonization processes in America, Africa and Eurasia. Authors also consider mediating effects of social structure in this respect. In particular, in tribal societies of both Americas social institutions was weak which resulted in high vulnerability to alcohol. That was one of the main factors why those societies were easily conquered by Europeans. The presentation was very stimulating. Nevertheless, Christian Welzel pointed out that there were different types of colonization. For instance, China was not formally a colony, but was divided into several zones of economic influence by most powerful states.

Alexey Zakharov (LCSR, Moscow) presented his new research on the genes effect on redistribution and collective behavior. His report was very interesting and inspiring. However, Jon Miller noted that one should be very careful with genetics in social sciences: for revealing causal relationships researchers should look at genes in dynamics which seems to be problematic since genes change very slow over time.

Alexey Belianin (ICEF, HSE) reported the progress in his research on the effect of chronic disease on perceived well-being. His presentation caused a lively discussion and Alexey got a lot of positive feedback.

During the next session Tatiana Karabchuk reported unexpected results of her study of effects of choice between career and children on subjective well-being of women: the number of children a woman has does not affect her subjective happiness. Furthermore, Tatiana confirmed a hypothesis about negative effect of closed labour marker on subjective happiness of women.

Interesting findings were provided by Malgorzata Mikucka (Polish Academy of Sciences). She showed that the level of happiness grows before the marriage and falls back to the normal level after it. Moreover, single people gradually get as happy as married people.

During the last session a very interesting report was delivered by Peter Schmidt (University of Giessen, Germany; HSE). Professor Schmidt explored the role of universalism, traditionalism and conformity in formation of attitudes towards migrants.

In the evening a rich table was prepared for participants and guests of the Conference.