Read a report by Olga Basmanova 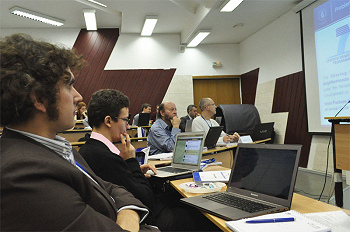 Today the 2nd International Annual Research Conference of the LCSR “Social Change in Cross-National Perspective” has started its work. The first day of the Conference was opened by Eduard Ponarin, the LCSR Director, and Alexander Chepurenko, Dean of Faculty of Sociology at HSE. Professor Chepurenko admitted high level of work of lab’s staff and congratulated them with the progress they achieved. Eduard Ponarin pointed out that LCSR had quite real chances to receive grant renewal, and wished to keep working in the main direction of the lab.

The first session of the first day was dedicated to studies of subjective well-being. Francesco Sarracino (University of Florence) talked about influence of social capital on well-being in Russia and China. The next speaker, Ekaterina Lytkina, a research-assistant at the LSCR, presented new results of her research related to measurement of anomie and well-being. Svitlana Khutka (Kyiv-Mohyla Academy) presented the final report on her project «Subjective Well-Being and Human Agency: Transition Countries Compared to the ‘Non-Transition’ Countries». Basing on human development theory proposed by Inglehart and Welzel, Svitlana found out that influence of well-being on human agency is stable over the countries. However, this influence is higher in transition countries than in non-transition ones.

Evgeniy Varshaver (LCSR HSE) opened the second session with presentation on «Self-Control and Educational Performance in Comparative Perspective». After that Boris Sokolov, another member of the LCSR team, presented a progress report concerning his project on study of value change and nationalist attitudes in Western Europe. Olga Demidova (HSE) spoke about European residents’ attitudes towards migrants. She pointed out that in countries that joined EU before 2004 the higher the unemployment the lower the evaluation of the economic and cultural contributions of migrants to these countries, while in countries that joined EU after 2004 and non-EU countries the relationship is opposite.

After the lunch Anna Nemirovskaya (LCSR HSE) presented a final report on «Social Tolerance under Harsh Conditions». Anna found out that tolerance can be explained both by socio-economic, socio-politic and socio-cultural factors. Another final report was delivered by Anna Almakaeva (Samara State University). She explored human empowerment and paradoxes of trust using WVS data.

The final session of the first day of LCSR Conference was devoted to topics of social solidarity and welfare state. Anna Shirokanova (Belarus State University) demonstrated the audience final results of her project «Individualization and Social Solidarilies in Post-Communist Europe: Do Old Divisions Persist?».  Irina Siegel (University of Freiburg) demonstrated preliminary findings of her new project. She studies intergenerational solidarity and value attitudes under different social conditions using EVS data. Finally, Olga Gryaznova (IS RAN) also a new project. She examines support of welfare state in several dimensions including unconditional social guaranties, support of a family and minimization of risks in a labor market.

By the end of this very interesting and saturated day the welcome cocktail for participants was organized.