The first place in Salminskiy Scholarship Competition for young political scientists was granted to Boris Sokolov, Research Fellow of LCSR. 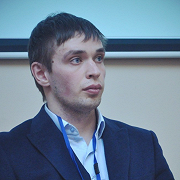 The first place in Salminskiy Scholarship Competition for young political scientists was granted to Boris Sokolov, Research Fellow of LCSR.

The competition was founded by the Russian journal in political science "Politie" and the Foundation "Russian Public Policy Center" in 2005. The participants could be students, graduate students, research assistants and fellows who have not attained 30 y.o..

We congratulate Boris Sokolov with an article «Individual Rationality and Collective Norms (On Problem of Legitimization of Moral and Political Theories)» being published.

The paper investigates the problem of practical justification of legitimacy of normative concepts. Having discussed three main approaches to solving this problem, Boris Sokolov concludes that the most effective one is an approach that appeals to the idea of the treaty among rational individuals about the rules of social coexistence because it aims at achieving congruence of individual interests and of tenets of normative theory, and requires neither use of violence nor introduction of transcendental and unverifiable entities to support claims for normative importance. The main advantage of contract theories is that they provide the minimal possible justification for moral systems and elaborate arguments for why a person who doubts a necessity to follow moral norms (or state laws) could agree with the requirements of this or the other ethical concept.

More information can be found on `Politie` web-site: