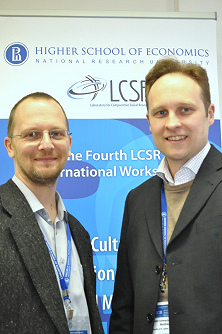 The third day of the 4th LCSR International Workshop began with a working session on subjective happiness and well-being. Irina Vartanova (Institute for Future Studies, Stockholm) presented a report on subjective well-being of knowledge workers. Markus Kainu (University of Turku) discussed the determinants of poverty and attitudes towards it in post-Socialist countries. After that Roberto Foa (Harvard University) reported on his joint project with Anna Nemirovskaya  (LCSR HSE, St. Petersburg) on governance in Russian frontier regions.

Coffee-break was followed by the plenary session where Francesco Sarracino (STATEC, Luxembourg; Gesis, Germany) gave a talk on socially sustainable economic systems. Looking at the connection between economic growth and social capital, he discovered that in the situation of significant social inequality economic growth erodes social capital and decreases the level of subjective well-being. However, there are some reasons to believe that the creation of socially sustainable economic system that aims to boost subjective well-being is theoretically possible.

The third day of the workshop was concluded by bus excursion ‘Night Moscow’ organized for the guests of the conference.